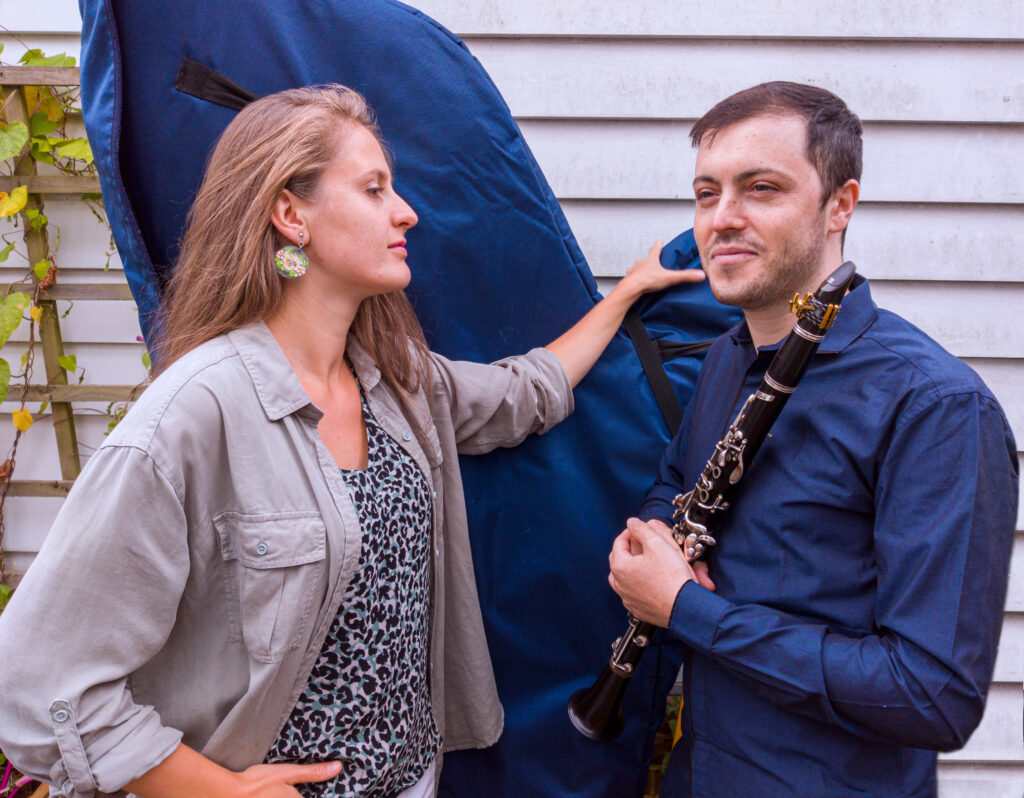 This international duo combines the unique sounds of the clarinet and harp, creating a multifaceted palette of sonorities; Exploring both new music and the much loved and established repertoire. They have captivated audiences throughout the country.

Winner of the Suoni d’Arpa International Harp Competition, Rosanna made her London debut in the Royal Festival Hall at the age of 20. She gives regular recitals throughout the UK and abroad including appearances at the Wigmore Hall, the Three Choirs Festival, the Royal Festival Hall and recently on BBC2 Encore. She is also a  Making Music Selected Artist.

Alongside her solo career, Rosanna frequently works with the Budapest Festival Orchestra performing under conductors such as Iván Fischer and Marin Alsop, and playing in some of the worlds leading concert venues including New York Carnegie Hall, Amsterdam Concertgebouw and Hamburg Elbphilharmonie. She is also Guest Principal Harpist of the City of Birmingham Symphony Orchestra and the Aarhus Symfoniorkester in Denmark. As principal harpist of the European Union Youth Orchestra from 2016 to 2018, Rosanna toured extensively throughout Europe and the Far East, working with conductors such as Vasily Petrenko and Gianandrea Noseda.

Much in demand as a chamber musician, Rosanna has recently performed in Shanghai, Bucharest and Berlin as well as many venues in the UK. She is a founder member of the European Chamber Ensemble and the  Igneous Ensemble, and member of the Cantiaquorum Ensemble.

In 2018 Rosanna received her Master’s degree from the Royal College of Music where she studied with Ieuan Jones and Marisa Robles. At the Royal College she has won the harp competition three times as well as the chamber music prize and the concerto competition. As part of the Budapest Festival Orchestra Academy, she continued her studies with Ágnes Polónyi.

Daniel enjoys a very busy career as a clarinettist which has so far taken him across Europe, India, Switzerland, Serbia, the Far East, and China.

Daniel has worked with Mediaset and Rai in various TV-programmes and live television broadcasts, and has performed in several CD and DVD recordings with orchestras and chamber ensembles.

As a solo clarinettist, Daniel has won 1° Prize in the Premio Abbado competition organised by the Ministry of Education in 2015, and was a finalist in the Società Umanitaria competition in 2014.

Alongside this, Daniel is also a member of the Corde in Aria, a clarinet and piano duo formed in 2013, and Quadrophobia, a wind quartet with whom he has recorded a CD; “In Quattro”. They are currently working on their next CD. He is a founder member of the European Chamber Ensemble.

“Thank you very much for an enthralling evening.”
All Saints Music Festival Chalfont St. Peter.

“Thank you both so much for giving us such a stunning concert – it was an absolute joy!”
Music at St. John’s Harpenden